What's your story on maque choux? And two get Amuny's 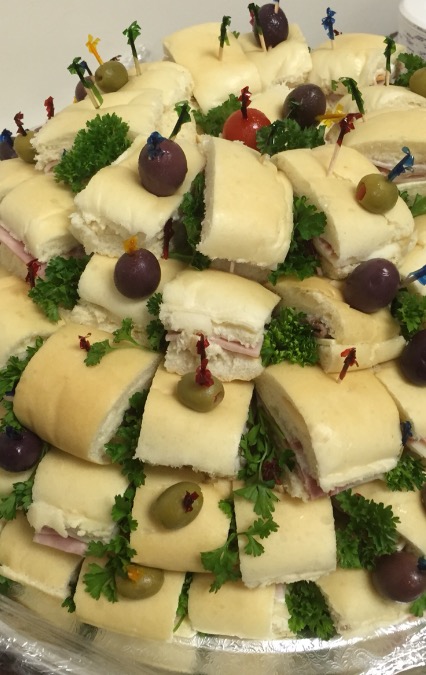 I went to a meeting where there was going to be Amuny’s sandiwiches, one of my favorite things about Port Arthur. I knew they would be there because I was bringing them to the meeting.
My husband could not attend because he was going to a program elsewhere and had voiced regret he would not be eating those sandwiches.
As I sat down to my plate at my event, he sent me a text, reading “Guess what I’m eating?”
He then sent a photo of a big platter of Amuny’s sandwiches that he was enjoying across town.

Maque choux query for readers
I was concentrating on just-right pistolettes at The Neches River Wheelhouse when Charlene Fortenberry introduced herself and we started talking about maque choux.
I ‘m a big fan of this corn blend and I don’t know why it’s not a part of my life much more often. Fortenberry, who has ties to the old Farm Royale restaurant, suggested I put this topic out to readers as a “curiosity that some of your Cajun-bred readers may be able to shed light on.”
Heres’ what she says: “I grew up eating my mom's maque choux, as I'm sure you did, too. I saw it on the Wheelhouse menu; first time I had ever seen it at a restaurant around here. My two friends had never heard of it (they're not French, bless their hearts, haha) but one of them ordered it and so did I. It was delicious of course, but it had cream in it. Well cream makes everything better, but I had never had it like that before. After discussing it with family and friends, the consensus was that no one else had tasted it like that. So, is that a regional thing or was the chef being creative? This isn't an earth shattering topic, but maybe you can make it into something interesting. Still loving your column, Charlene.

I’m already interested. So here’s my story. When I went to ask my mom about my beloved creamy corn dish, she said she recalled maque choux in Louisiana as being not creamy, but what I was eating was creamed corn in the “northern” style of my grandfather. Somewhere along the way I was eating what Louisiana relatives combined: creamy corn, seasoning, onions and peppers. I love it, whatever it is called.
Now, readers, please let Ms. Fortenberry and I know your experiences with maque choux, by writing darraghcastillo@icloud.com.
We’ll be waiting to hear from you!
Posted by The Port Arthur News at 10:34 AM No comments:

Playing with peanuts and kosher holidays 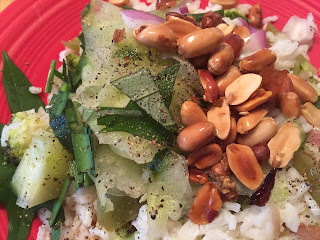 Someone celebrated a birthday at Logan’s Road House in Beaumont and we left with some in-shell peanuts. I chose to make them the protein in an Asian meal I made up.
I don’t know what to call it, but coconut milk, cucumbers, purple onions and garlic chives ended up over Jasmine rice, and the peanuts went on top. It was filling and light at the same time. It’s always good to play with your food.

The Kosher Baker
The only time Paula Shoyer uses store-bought challah is to make bread pudding, because her family won’t give up a homemade challah without a fight.
She shares a Mocha and Whiskey Chocolate Bread Pudding, made from this bread, that puts one in the mind bread pudding much closer to New Orleans and meant to celebrate Mardi Gras.
Shoyer teaches French and Jewish baking in the Washington, DC area and offers some amazing recipes and background in her book “The Holiday Kosher Baker.”
This is a more serious book for those who know their way around flours and macarons. Finished results are beautiful and, I assume, tasty. I’d like to book a flight to DC to sample some class projects.
Here’s a taste of what’s in the book:

Babka Bites, Honey Cake Biscotti, Whole Grain Carrot Cake, and Fruit Cobbler with Chickpea, Pecan and Cardamom Topping. As says the subtitle, these are traditional and contemporary offerings.
darraghcastillo@icloud.com
Posted by The Port Arthur News at 7:47 AM No comments: 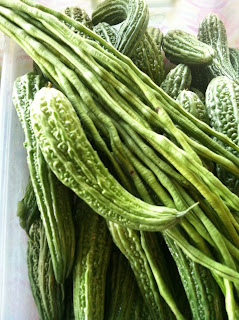 Eat Fresh!
Last Saturday morning I heard two women discussing the Beaumont Farmers’ Market. Why, I hadn’t been since last season. I sure am glad they reminded me. I headed right over to the municipal complex on College Street and snapped up a bag of huge figs and a $2 bunch of  long beans. They’re more than a foot long. What fun.
I also got all camera crazy with cartons of beautiful blue-tinted eggs from Dan the Chicken Man. The market will continue through December, I’m told, but won’t go on Sept. 26 because of a tennis tournament.

Leftover chocolate?
Sometimes there is. I always like to keep a few morsels of dark chocolate around (or semi-hidden) the house. So there’s sometimes a heart-shaped chunk wrapped in pink foil or a festive egg under some more suited to a Halloween look. Still good, I’m sure, but we go to the “eye candy” of a seasonal look.
Unwrap those little guys and melt them on to buttery, crispy toast. They’ll melt into a sweet mass so delicious your mouth won’t mind it was wearing last season’s dress just moments ago.
darraghcastillo@icloud.com
Posted by The Port Arthur News at 11:46 AM No comments: