And now for some cheese

Brie, baby
Brie is already my favorite. Does such a fine cheese need to be gussied up with more goodies like nuts and raspberry jam?
I had the pleasure of sampling some baked brie with house made caramel, toasted almonds, fresh strawberries on grilled foccacia and crostini. I nearly teared up at the experience. It took me months to play with that notion that something sweet and/or salty would be good on most any white cheese and I did a quick test of microwaving white cheddar in a glass dish and spreading a bit of something like hazelnut spread on top. Again with the weeping. Can’t wait to play around some more.

Blue cheese
A little blue cheese goes a long way. I ‘ve been nursing a block for weeks by releasing a few crumbles onto eggs in the morning or salad for l lunch. I took a hint from restaurants and melted a tablespoon onto a grilled steak. Sometimes we forget about blue cheese until we see it on a menu. Go ahead and go blue right at home in your own kitchen.

Got it
People have been asking if I got my Haggen Dazs because I shared a story about enjoying other frozen treats on the way to tasting this one. I finally did, under unusual circumstances.
I enjoyed a great Orange Community Players’ production of The Great American Trailer Park Musical and after the show we passed a Kroger. My husband and I agreed to share a small carton of coffee flavored Haggen Dazs even though that little container housed 3.5 servings and even though he’d have preferred butter pecan. I wanted to eat it on the garden swing they had displayed in the store but compromised and dined in the deli. There were no spoons so we carved out the hard ice cream with think plastic knives. Awkward, but fun and delicious. That was date night in Orange.
Darraghcastillo@icloud.com
Posted by The Port Arthur News at 6:11 AM No comments: 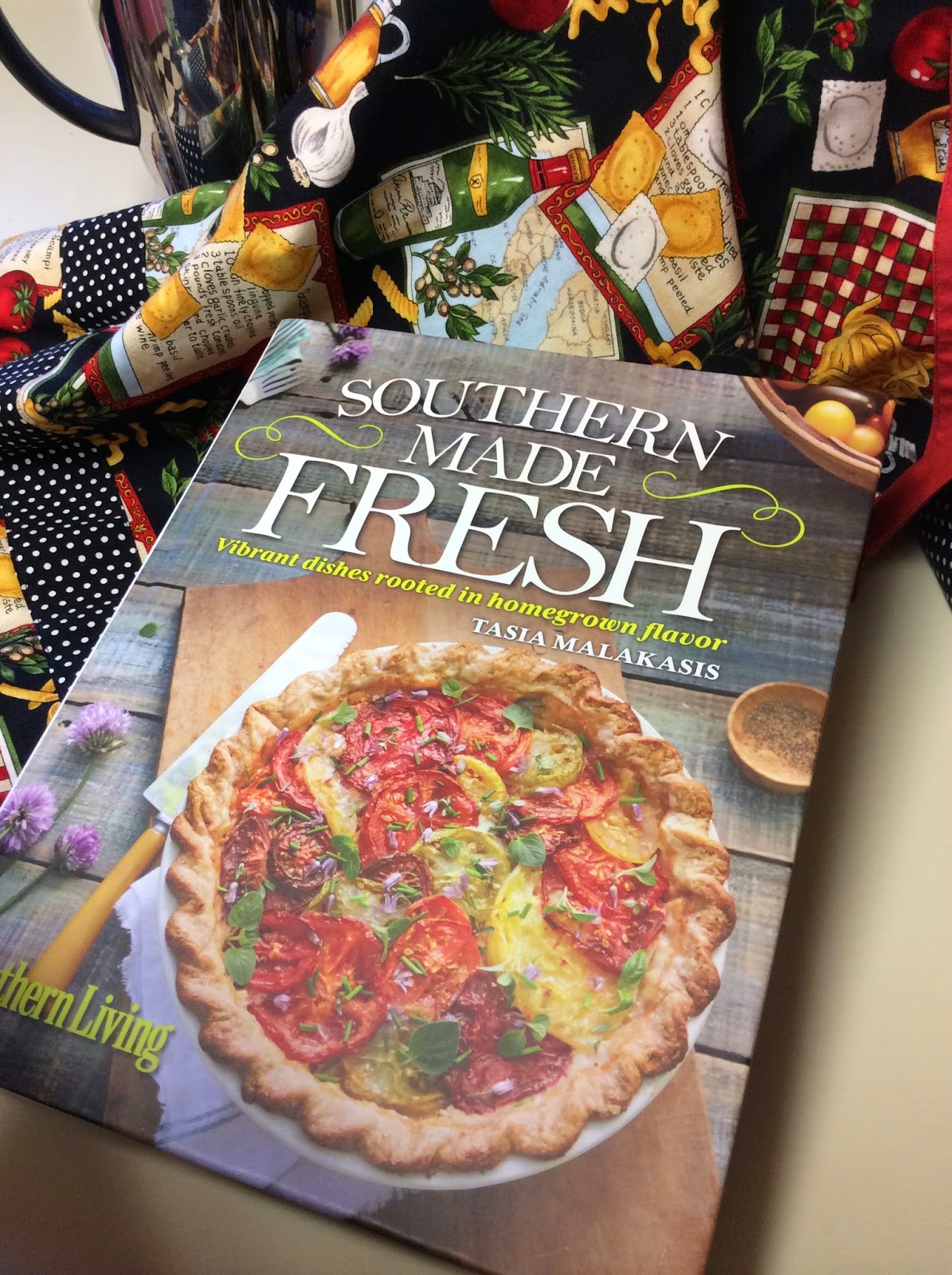 “Southern Made Fresh”
Oh my goodness but Daddy loved lima beans. I never did, in the traditional way. I love what Tasia Malakasis has done with them in “Southern Made Fresh: Vibrant Dishes Rooted in Homegrown Flavor.” It’s a Southern Living cookbook, so you know it’s high-quality with beautiful photos. The author also loves the tradition of Southern nibbles and also thinks Brussels sprouts were created as a form of wretched punishment for children. Her traditional and progressive attitudes allow her to keep playing, until she tried the sprouts in a slaw, with honey and mustard. She makes little switches like adding avocado to the already-classic BLT sandwich, and goes ahead and turns bacon into candy. I like her.
This book will help you plan a supper for one or a summer party for the block. I’m pretty sure my dad would have liked what she did to limas, but he’d have had to have also had a little bowl full flavored in the way to which he was accustomed. See, the South is big enough for all of us to get along.

Angel food
I don’t even know how the angel food cake mix showed up in my pantry. But someone gave me the lemon pudding mix. So I combined the two to make a birthday treat for a friend. I didn’t care for angel food cake as a child, going instead for something more rich. Now I appreciate the subtlety of the sweetness, but it’s easy to kid yourself that it is more healthy and you can have an extra piece or two. So I topped it with the lemon pudding/pie filling I cooked up and enhanced with vanilla and whiskey.
It went well, but here’s another observation. At our ages, I tend to top birthday cakes with one symbolic candle. It’s kind of difficult to decide where to put one candle in a bundt cake. There’s no middle.
Oh well, it worked. There were no leftovers.

Do you blame the sulfites?
I certainly have. Used as antimicrobial and preservatives for bottling and storing wine, sulfites cause a sensitivity in some people. I think I’m one of them. Jean Ishihara used to feel very sick after wine and came up with a Just the Wine, which comes in eye-drop sized bottles so you can squirt a few drops into your glass or bottle. That’s all there is to it, but the story is interesting. Go to justthewine.com for the background. I tried it over the holidays and offer a good report.
darraghcastillo@icloud.com
Posted by The Port Arthur News at 6:18 AM No comments:

Ever since that Texas Monthly barbecue editor spoke at the McFaddin-Ward House, I’ve been on a mission to get to Patillo’s in Beaumont. Saturday, after a meatless Good Friday, my family got coated in sauce. We shared some ribs and a link, with the juicy link being our favorite. It’s just fun to go in and breathe in the aromas, visit with the waitresses and watch everyone else enjoying their food, too. It’s another reason to love Southeast Texas and all we have to offer.
Nappa cabbage
I’m mom has always been an innovative cook, serving things that no other of my classmates had ever experienced. She attempted true gourmet dishes way before there were cooking channels everywhere.
She just mentioned she’d never cooked nappa cabbage or bok choy at home, so I went out and presented her with a head of nappa. Knock yourself out, I told her. I had already sneaked off a few outer layers of this delicately, ribbed cabbage to use in salads before I gave it to her. So she invited me to dinner and it turns out she’d used the cabbage to make into “unstuffed” cabbage rolls, with a tomato sauce and meat.
Of course it was good, but I sure thought she was going to highlight this nappa’s beauty in some Asian dish. When I quizzed her, she assured me the last leaves would swing that way.

Onion tips
Pinterest is great for gardeners. I’ve had a little success snipping off the root end of onions and planting them to grow green onions. Word out is that onions from the store are treated to generally prevent this sort of recycling. If I plan 10 roots, maybe one or two of them will begin to grow. Readers, I’m wondering of you all have any tips on this. Let me know at the contact below:
darraghcastillo@icloud.com
This column runs in Port Arthur News

Posted by The Port Arthur News at 10:52 AM No comments:

Barbecue lovers “eat up” editor’s talk
Sometimes Daniel Vaughn would just lose himself, looking at the slides of pepper-crusted brisket or cheeky meat he flashed on the big screen. Sometimes his audience would work up some “mmmm,” “oh  yeah” or “Amen” comments when he mentioned a particular favorite barbecue joint. (City Market in Luling for me).
Vaughn is the Texas Monthly barbecue editor, which sounds like one of the best jobs in the state. He shared the history, methods and regional practices of our beloved Texas Trinity of brisket, sausage and ribs at a McFaddin-Ward House free lecture on March 19. Then, Brad Klein’s brisket-cooking wagon released some flavorful brisket for everyone to sample with a side of pickles, onion and potato salad. I won’t even mention the banana pudding.
Oh yeah, everybody had a good time. He began with brisket on butcher paper, covered meat by the pound, trenches dug for whole animals when a barbecue involved the whole town, and the notion some meat markets had to fire up pits so customers could buy some cooked meat and enjoy it right there, without a day’s investment in cook time.
Vaughn is author of “The Prophets of Smoked Meat,” which I had the pleasure of reviewing in this column, and he held our attention as he also discussed backyard pits for cooking goat, the crisp casing of smoked boudain and even the eye of the cow, which turns out to be more beefy fat instead of fatty beef.
Most of the crowd was willing to hop in their cars and drive across the state for some of the mesquite/beef rib/avocado/tortilla/sausage/ dirty rice combos. Vaughn ate at Patillo’s and Gerard’s when he was in the Beaumont area and says followers will be able to read about it at TMBBQ.com.
Thank goodness, and the McFaddin-Ward folk, guests got to eat some brisket and sides from Brad and Katherine Klein, who barbecue as a hobby. What a great night.
We have a rich history and there may be a friendly or not-so-friendly debate about barbecue in Southern States, but Vaughn seems to support the notion of go with your tradition. If people think they don’t have “good” barbecue in the area, the could just mean they don’t have the kind the critic grew up with. He even showed a map with different regions of Texas and who uses mesquite, oak and other woods. While it may sound trendy that a California restaurant barbecues with grape vine, he thinks, why not? We all developed our flavor with what we have to work with.
So, it’s all different, and if it’s juicy and flavorful, it’s pretty much all good.
Smoke it, baby.
darraghcastillo@icloud.com 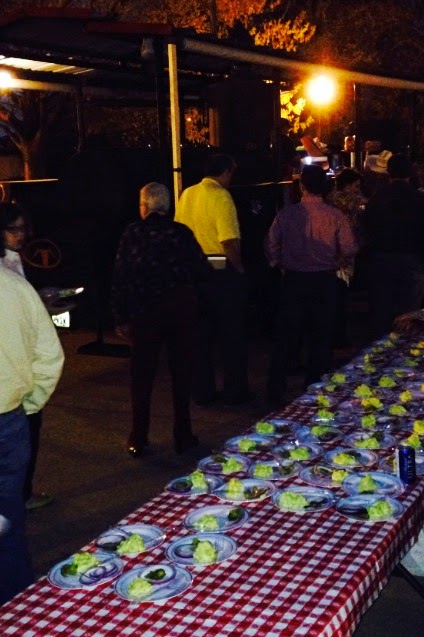 Posted by The Port Arthur News at 10:47 AM No comments: 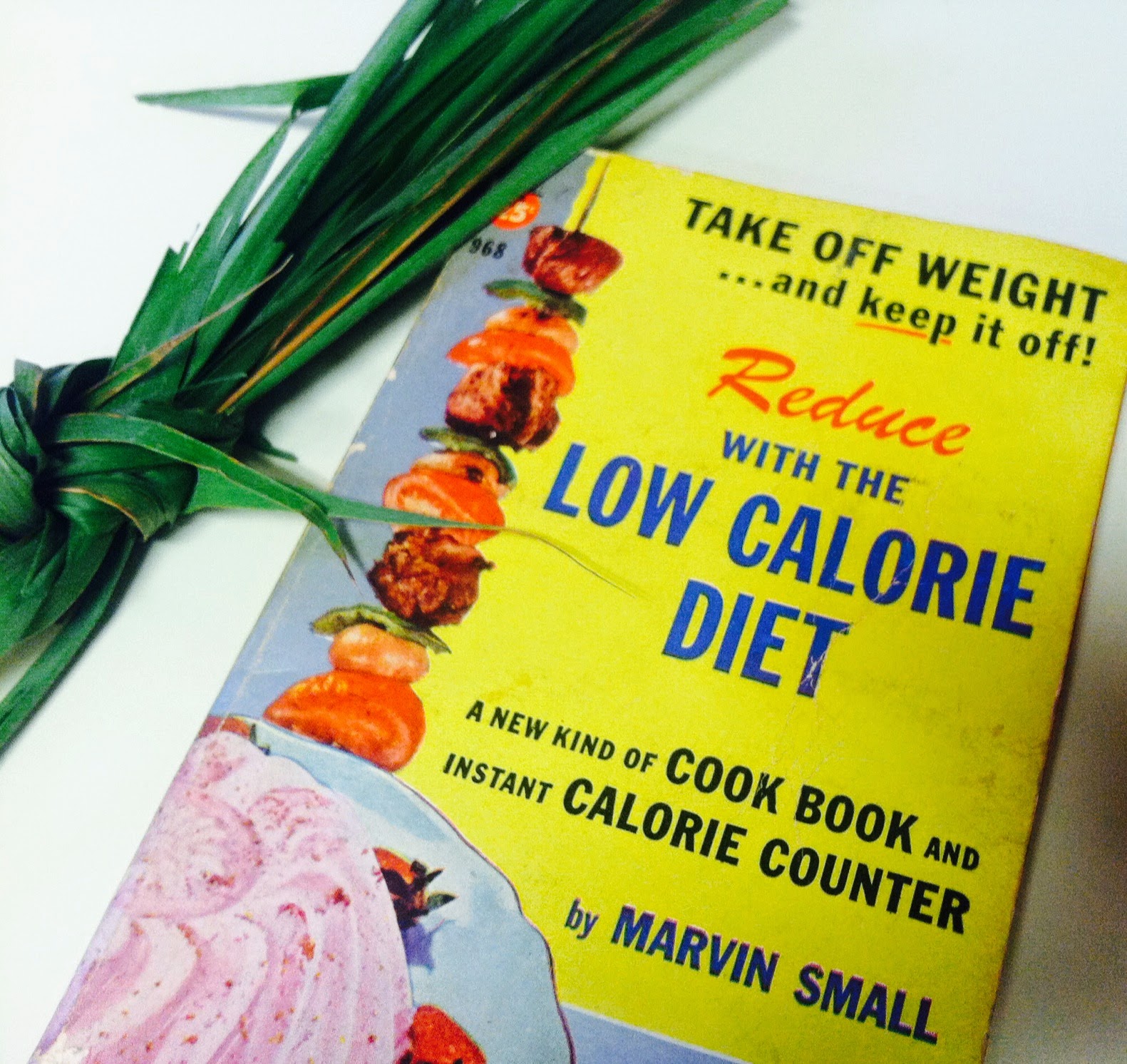 Reduce, with the Low Calorie Diet
I found an old paperback that someone in my family had. It cost 25 cents in 1953 and apparently offered a novel concept.
Take Off Weight… and keep it off! Reduce with the Low Calorie Diet. A New kind of Cook Book and Instant Calorie Counter, by Marvin Small, reads the yellow cover. There’s a kabob with lots of vegetables and a platter of what appears to be gray, cold meat surrounded by strawberries. It could be some sort of tomato gelatin, because there are lots of this kind of thing in the book, along with ideas for cottage cheese. It was a fun read and I think this is the kind of food most people still think of when they think diet.
Now we try to look at one’s diet as the whole of the healthy foods one intakes, like whole grains, dairy and fiber. Cookbooks today make these foods look incredibly appealing. Thank goodness.
Here’s an offering from the book. I usually share recipes because they sound so tasty. I’m sharing this one because it doesn’t sound appealing at all!

Boondoggles
My daughter lives in the Seabrook area and Boondoggles in El Lago was my first taste of  all the restaurants she says we’re going to try. It’s a pub that’s dark, features a bulldog coat of arms, tall tables and a pizza oven. With that English feeling, set next to the darts, we enjoyed the jambalaya pizza and wings. This place is a fun way to begin the evening, or end it.
darraghcastillo@icloud.com

Posted by The Port Arthur News at 10:22 AM No comments: