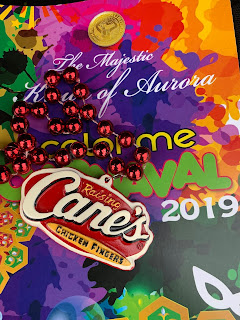 Do you need a set of beads to promote your love of chicken fingers?

If they're throwing Mardi Gras beads, I'm catching them. Big, red beads with a Raising Cane's Chicken Fingers "medallion" came my way at Saturday's Majestic Krewe of Aurora ball. I also raised my hands for beads with masks, commemorative beads, beads not unlike pink crystals an all manner of shiny, blinky things.
This year's ball was as awesome as ever, with the festival's Color Me Carnaval theme. I finally got to hear DeAndre Nico sing. He performed the National Anthem before at the beginning of festivities. Costumes, friends and beads made for an exciting evening at the Robert A. "Bob" Bowers Civic Center.

You should have seen the size of the king cakes.

When you're out on Mardi Gras of Southeast Texas grounds this weekend, have some Cajun flavors for me!

Bread pudding in the morning
What's not to love about a serving of bread pudding for breakfast? Pairing it with eggs is not a stretch. There are lots of eggy and bread-based morning casseroles that don't involve rum sauce, so try a basic bread pudding this season with a hint of syrup.
In fact, we here in the Cajun part of Texas claim bread pudding, but there's a lot to a less sweeter version that puts me in mind of a Mexican breakfast. So that's how I ended up with a bit of bread pudding, egg and spicy red salsa on my plate. You know what? It sounds good for dinner, too.

Taste of the Triangle
So this Fat Tuesday, consider ringing out the season with the 36th annual Taste of the Triangle at the Beaumont Civic Center. The Sabine Area Restaurant Association benefits from ticket sales and you won't leave there hungry. This is a very cool area event and Mid-County restaurants are often the stars of the show.

Darragh Doiron is a Port Arthur area foodie having so much fun during the Mardi Gras season that she can't wait for Lent to begin. Reach her at darraghcastillo@icloud.com
Posted by The Port Arthur News at 2:29 AM No comments:

Hearts and the Year of the Pig 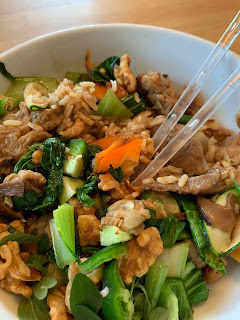 If you’re of the mind that a Valentine’s Day celebration – held on Feb. 14 or thereabouts – absolutely must include red wine and chocolate, I’m with you.
We’d be good friends. Let’s do this.
Everything in moderation, right?
But just saying, I’d be happy with a good Judice’s burger with and chips. Or a fudge malt from Dairy Queen. Gumbo is always good.
But Valentines, like relationships is about compromise. Pizza would be my sweetheart’s pick.
Also just saying, I hope that if that’s the way the night goes, he knows about the obligatory wine and chocolate thing.


Tet m                Tet made me head to Port Arthur’s Vietnamese markets to stock up on spices. I was there a day before the dragon dancers and focused on fresh vegetables including eggplant and mini bok choy.
I looked up how to make egg drop soup the right way. It turns out the translation is “flower” so you don’t really drop in that egg and swirl it in the soup pot. You crack it into a bowl first and then swirl and pour it in to the bigger pot. A bit of cornstarch makes it thick and a tad of turmeric gives it the golden color.
The Tet season also inspired me to cook a pot of rice flavored with all the fish powder I had in the pantry. After all, the new year is a time to make way for the “new.”
Darragh Doiron is a Port Arthur area foodie with a heart for exploring new flavors. Reach her at darraghcastillo@icloud.com
Posted by The Port Arthur News at 2:14 PM No comments: 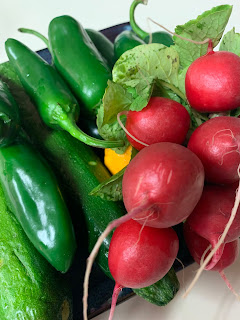 Super Bowl is a veg-out; details later.
Something happened to make me think of ‘70s era breakfast, and I’ll get to that soon, too. Keep posted here for updates.

Here’s a memory of favorite breakfast foods when I was a child, in the ‘60s and ‘70s. While I’m sure my mom served healthy breakfasts to me before school, I mostly recall the rather special occasions I got the flashy, colorful and sugary foods that were marketed to kids. Pop-Tarts were a treat. Cereal was rare but I loved Captain Crunch, in peanut butter version. I even had his coloring book and staying in lines of his uniform. Malto-O-Meal had a soothing texture.
Tang was everywhere, even in space. I wasn’t actually in the kitchen a lot, but I remember mixing up Tang when it wasn’t my job to mix up instant tea for the evening meal. I still have the tea pot we’d pour from, like it was “real” tea, I suppose.
Sunday breakfasts were the real thing with grandma’s perfect biscuits and boudain. If there was cream gravy, I got to make it. I still have the little pitcher we’d pour from.
Darragh Doiron is a Port Athur area foodie who may not get sports, but appreciates the bonding around them. Reach her at darraghcastillo@icloud.com

Posted by The Port Arthur News at 11:14 AM No comments: 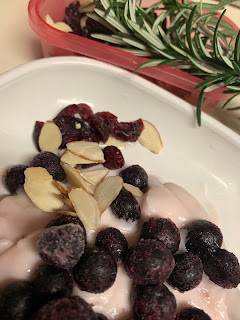 Are your beads out? Mine are. Doors are decorated for Mardi Gras, set for Feb. 28-March 3 in downtown Port Arthur this year. DeAndre Nico will be a part of all of this and people are excited.

That gets us all excited about the flavors of Mardi Gras and what could be new out there to taste. I’ll be making gumbo in anticipation. Get your tickets!

Who said gumbo?
But wait. Rotary Taste of Gumbo, Etc. comes before that on Feb. 16 at the Robert A. “Bob” Bowers Civic Center. This tradition skipped a year because of Harvey, but they’re back for good flavor and a good cause. Again, get your tickets!

But now, for yogurt
Now that I’ve got you all excited over the spice, take a moment to consider the humble yogurt.
It’s cold, it’s comforting, it’s plain. Except when it is most definitely not plain. For all you folks who think you must have ice cream, please remember that thick, rich, Greek yogurt can get fruity and nutty and covered in chocolate to satisfy your cravings.
Some people still don’t believe me.
Pity.
Darragh Doiron is a Port Arthur area foodie happy to eat yogurt daily and plan ahead for gumbo and more gumbo. And more gumbo. Reach her at darraghcastillo@icloud.com
Posted by The Port Arthur News at 10:45 AM No comments: