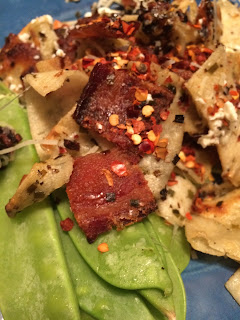 Still riding high from our total eclipse viewing in Tennessee, we came home to Harvey, the top Texas news.
My mom, recalling long power outages after Rita, was hoping we’d take her out of the flash flood path and all the way to Sherman, but alas, plans come and go so quickly in a time of potential crisis. We had seven plans and ended up pretty safe at home on Sunday.
Thank goodness she didn’t look out the window when our street was flooded.
She mentioned cleaning our her freezer before we left, as we recall how trashed, stinky ice boxes lined the streets before. I hadn’t realize that she was thinking we’d take an ice chest full of food to our host’s home so we could cook it there. That was too much, I thought, for the willing host family to deal with. As it became clear we were staying, we started defrosting and eating up the best stuff first.
Where had she been hiding all that chicken, roast and Italian sausage? I got crazy with her seasonings and sauces. The best, part, it was all pretty low carb.
I saw on a Weight Watchers Facebook page people discussing doing some heavy Harvey snack binging, but I stayed on track with meats and veggies. Low carb and all.
I saw other Facebook pages people kind of freaking about where to get food at restaurants, but thanks to my mad creative cooking skills, I stayed more than nourished.
My colorful pitchers of drawn tap water for emergencies could have made a Pinterest post.
Readers, I hope you all can get Harvey behind you soon. The rain is picking up again a I write this.
Here’s one of the use-it-up bites I came up with:

Herbal Nachos
Cut corn tortillas into strips and sautee in butter. (Normally I’d use olive oil, but I was trying to use up butter if the power went out.)
Work in any dry herbs you have and melt cheese on top. Top with chopped onions if you are lucky enough to have them.
Mom’s bacon crumbles, a sprinkling, a dusting of crushed red pepper and a bed of sugar snap peas made this a feast.
Enjoy as finger food or eat with a fork if you added lots of cheese.
Readers, feel free to share you culinary Harvey experiences with me at darraghcastillo@icloud.com
Posted by The Port Arthur News at 2:16 PM No comments: 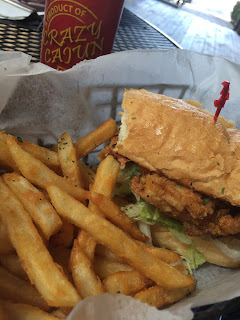 Shona Chesterman gave me a hug when I left Crazy Cajun. Maybe everybody gets such great attention. Maybe everybody was extra congenial due to a sunny day, live band and grand opening samples of bread pudding, boudain balls, fried pickles, catfish and more.

My cup runneth over.
I’d been hearing about this new place at 2310 North 11th Street in Beaumont, where most recently Starvin’ Marvin’s was. A Facebook post caught my eye and I showed up for Saturday’s grand opening and took home a door prize of Crazy Cajun hot sauce, with “A Product of Louisiana” branding.
I behaved as I would in Louisiana and ordered an oyster poor boy, a very favorite of mine. On my second bite I was still raving about how lovely it was that the bread was toasted and I’m thinking that the insides are so big I wonder if I hadn’t received fried chicken nuggets. But those fried oysters were that big and soft and savory. The fries were golden brown like I love them and while I normally just taste the tartar sauce to save calories, I dipped all those fries in this good sauce.
A Mr. Worthington from the Cajun band outside recognized me from Knights of Columbus dealings in the Port Arthur area and I’m pretty sure he said his band just started calling themselves the Recyclables. They dished up some Beatles and rock classics between their Cajun sounds making a relaxing Saturday by the patio my new favorite thing.
It was just luck that all the free samples were circulating. I also loved the praline chicken. I saw eggplant on the menu but I’ll have to get back to Crazy Cajun to sample that one and take advantage of the free hamburger card I also won.
Hummus overload?
A pool-party hostess specifically requested ‘finger foods” be brought. I asked about a curry rice salad I make and still got the vibe of “more fingery.”
I had all the ingredients for hummus and decided it would hit the spot. Then I started thinking about the people invited to this party tended to be healthy-minded people who gravitated toward natural foods. I began thinking “what if everyone brings hummus?” Turns out, nearly everyone did. They were all different and all enjoyed.
darraghcastillo@icloud.com
Posted by The Port Arthur News at 1:16 PM No comments:

Try it with cucumbers; fruit with a secret 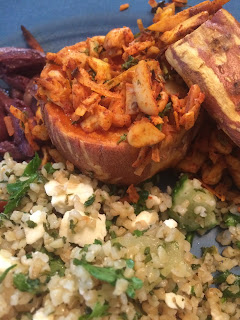 I got my culinary thrill seeking from my mom, who read up on foods from other lands way before the Internet made it a daily hobby.
I was not into tabouli when she first introduced it. This Lebanese salad fashioned from bulgur wheat seemed grainy, and the parsley was too sharp. Decades later it seems like a healthy taste of adventure.
Still, tabouli was maybe something we crossed every three years or so. Mom just heard of adding cucumbers to it, but it sounded like a natural to me. I suggested, perhaps not too subtly, that she make a batch for us and try it out.
The plan and the recipe worked, and she served up a refreshing salad with bits of cheese and drizzles of olive oil. To go with that were rounds of sweet potato that melted in one’s mouth, but also came with a crunchy topping.
Mom is in her 80s and I thank her for still for taking culinary adventures.

Do your peaches have a secret?
In “Fruit,” Nancie McDermott” takes a serious look at fruit as we Southerners do, sharing recipes for pies, preserves and pickles.
I learned about cantaloupe pickles and actually made and enjoyed watermelon rind pickles. It was easy. Hauling the big old melon home was the hardest part.       The author writes  that she was “brand new” to mayhaws as she set out to write this book, but was now ready to have a gathering-from-a-boat adventure. We’re all about the jelly, but try it in Mayhaw Jelly-Glazed Shrimp with Zucchini or in meatballs served with potatoes or egg noodles.
I was amused that mayhaws were new to her, but what do I know of scuppernong grapes? The drunken chicken recipe flavored with these fruits sounds appealing.
One pie in the book looks like a custard, but has a surprise layer of peaches. Rather than the traditional title of hypocrite pie, McDermott prefers to call it peaches with a secret.
Here’s one from the book:
Sherri Brooks Vinton’s Cantaloupe Pickles
1 cantaloupe, to yield 4 cups of 1-inch chunks
2 cups apple cider vinegar
1 cup sugar
2 tablespoons peeled and grated or very finely chopped fresh ginger
2 cinnamon sticks, broken into halves
1 bay leaf, torn in half
3 whole cloves
Wash the cantaloupe well, and then peel it, removing all the rind and seeds. Cut it into 1-inch chunks - you want about 4 cups. In a large non-reactive saucepan, combine all the remaining ingredients. Bring to a boil over medium-high heat and stir well to dissolve the sugar. Remove from the heat and stir in the cantaloupe chunks. Cover and let stand for 1 hour.
Place the pan over medium-high heat and bring to a boil. Lower the heat and cook gently, simmering for 1 hour. The fruit will be come translucent. Transfer the pickles and their cooking liquid to a bowl to cool to room temperature. Then scoop the pickles into jars and add enough cooking liquid to cover them. Cover and refrigerate for up to 3 weeks.

darraghcastillo@icloud.com
Posted by The Port Arthur News at 2:37 AM 1 comment: